Although we usually cycle off road where ever possible we have always, up to now, used panniers. We just tie them down well so they don’t bounce around. But after a grueling and knee aching trip in Ecuador we have decided the time has come to reduce the weight of what we carry. We have always resisted this in the past as we like a bit of comfort and the odd luxury especially where food is concerned.

We have used our fat bikes for a couple of tours where we know the surface is going to be rough and rocky, including 3 months in Colombia and Ecuador, and despite what everyone else says they are great for touring even on roads, like riding on balloons!

We initially saved 2 kg per bike by removing our front and back racks. We were surprised how much we could still get into the frame, front and back rolls, 44 litres on my bike and 46 litres on Bernies, down from 64 litres when using panniers. But overall Bernie managed to reduce the weight he was carrying by 9 kg and I reduced mine by 6 kg.

This included our cooking things that we weren’t prepared to leave behind and a coolbag with fresh food for stir-frying and flour to make bread.

It was a beautiful weekend, blue sky and a light tail wind, perfect. It is about 25 km to the edge of Exmoor from our house so it wasn’t long before we were beginning to climb.

Then we were on the start of the unsurfaced permissive byways and bridleways that criss-cross Exmoor.

The fat bikes made easy work of the rocky ground that had been hard work previously on our mountain bikes and we were soon deep into the moors. Some hills where a bit steeper that others but I found that I could push the bike much more easily without the back panniers.

While we were admiring the view from the top we realized that we had taken a wrong turn at the bottom of the hill and should be on the track we could see winding beside the river below.

There are just so many picturesque bits of this route that going the wrong way didn’t really matter.

We didn’t meet a soul all day and it was an easy and relaxing ride along the river sometimes on stony tracks and other times through the long grass.

with the occasional squeeze along the narrow wooden bridges across the river which we would never have got our panniers through. 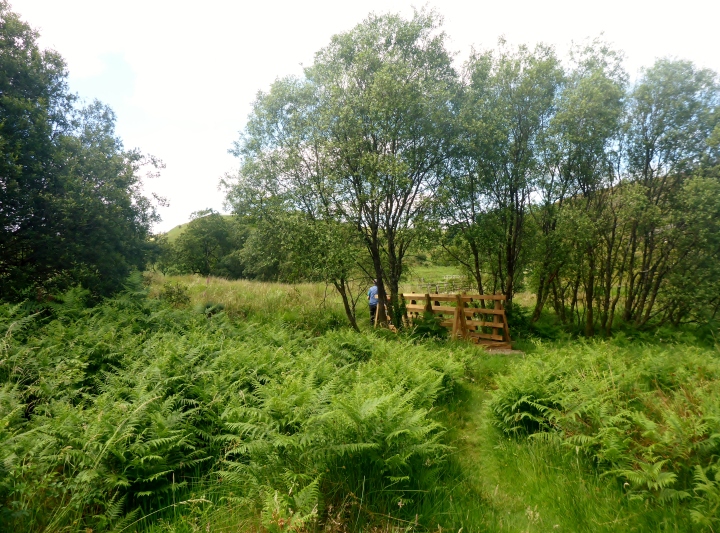 Then we left the river and started to climb up through a series of gates onto the open moorland with wonderful views across the hills and valleys. 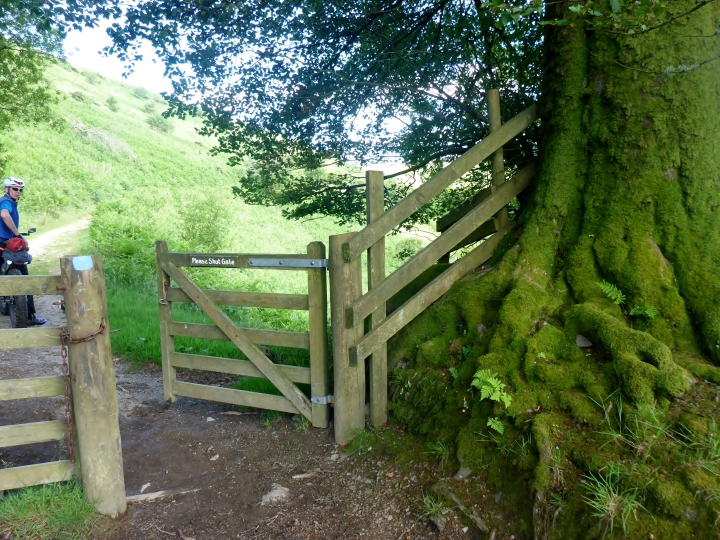 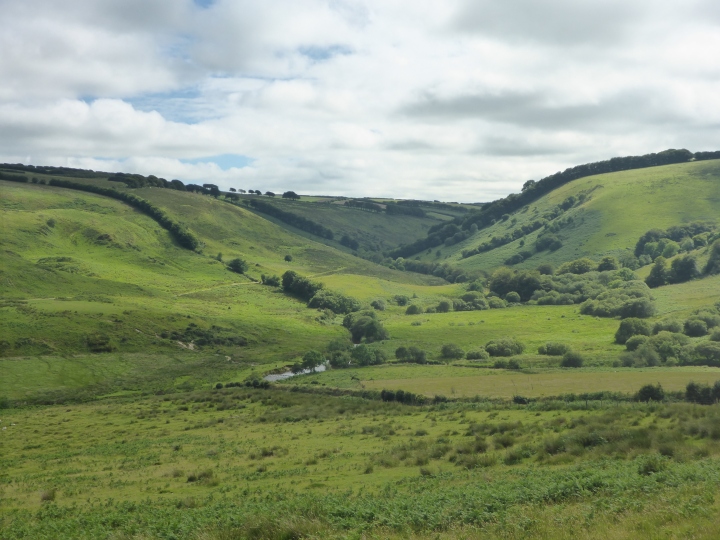 I have included a short video of snippets of our two days cycling here.   After a fantastic ride across the top of the moor we rejoined the road and splashed into Exford. We were staying at a campsite on a farm a couple of kilometers outside the village which was slowing filling up with teenagers carrying out part of their Duke of Edinburgh Award and staggering in with large backpacks and buckling knees.

We quickly made camp as it looked like the forecasted rain was coming in.

So after a cup of tea we started cooking our supper. This involved boiling up the spaghetti and leaving it to cook on one side along with our boiled eggs for lunch tomorrow. Then stir-frying some chicken thighs, courgette, leeks, ginger root and chilli with herbs.

We had to make do with Snickers for desert. Then Bernie mixed up the flour, yeast, oil and water and hung the bread dough in a plastic bag from his handlebars until the morning when we would fry it up.

We will be looking for a different solution for a lightweight tent. We had tried Bivvy Bags on Dartmoor last weekend, and although they were fine in the dry I would prefer some more cover when wet. So we are probably going to go for a light weight outer and the bivvies.

The campsite was bustling in the morning with the teachers trying to head their groups of tired teenagers off in the right direction. As we were by the river it is all up from here in any direction. We had a leisurely breakfast of porridge

and fried up the bread dough in bun sized portions for lunch.

It was quite a brutal start to the cycling day as with no warm up we were straight up a double arrow hill that just seems never ending. We have very low gears, but I could only just keep my pedals turning. At the top we turned off on a bridleway through some fields, which we eventually found out was the wrong way although very scenic, so headed back to the road and located the correct bridleway.

It was fairly easy initially as we were already high and fairly flat with great views.  But the grass turned to course reeds growing in clumps with peat bog in-between. The fat bikes were great as they stayed on top and didn’t sink in like thinner tyres would have, but it was still hard work.

We were initially on some kind of soft track but this eventually disappeared so we headed for a trig point we could see on the top.

From here on it got harder and harder as the reeds got thicker and the ground boggier.

By now we were pushing as it was impossible to ride.

We did eventually find a track again but it was so churned up by cattle it was still easier to walk through the reeds.

At least pushing the bike gave you time to look around not only at the view but also at all the Sky Larks. There are just so many of them up here. Occasionally we had to stop and clear the mud from the wheels so they would continue to go around.

On the way across we had met up with a couple of the Duke of Edinburgh groups looking vaguely lost and all hoping that we could show them where they were on their maps.

Although we were still on a private road it was now surfaced which gave us a chance to pick up some speed.

The land around us now was farmed with cattle

and a tractor cutting the hay.

Just down the lane we arrived in Simonsbath where we turned off into another Permissive stone lane with moss covered stone walls and fern filled gulleys that meandered along the valley next to the river.

To leave the moor we had to climb back up as we had lost a lot of height coming down to Simonsbath.

But again the views down into the valleys made the effort worth it. 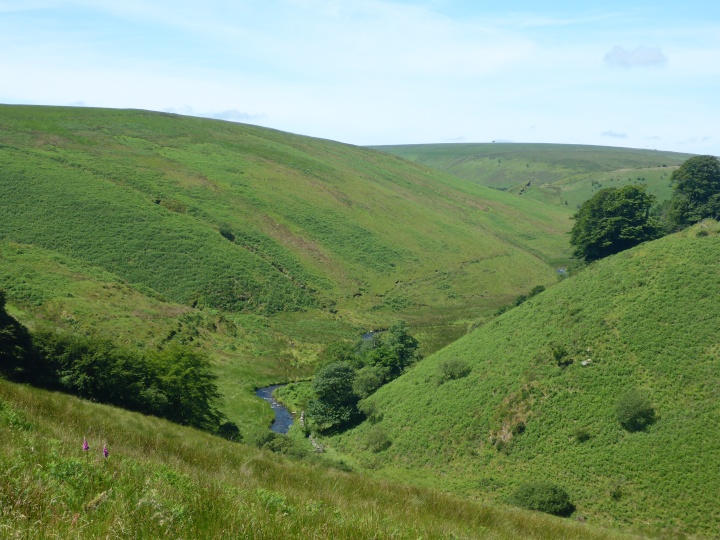 then had a quick snooze in the sunshine

before rolling back down off the moor towards the beautiful North Devon Coastline.