We have been back in Fernie, British Columbia, for a week while we wait for our Bob (Beast of Burden) cycle trailer to arrive from Vancouver.

Now that I can walk in a straight line again (most of the time) I have been practicing all week cycling with my hand in a splint. It works OK while I am underway but starting and stopping are interesting.

Bernie has switched the brakes over so that my good hand puts on the back brake and I can just about use some front break if I have to. The splint is heat moulded plastic that is just heated in water then moulded to the shape of my hand. I did ask at the hospital if they could make it to fit on to my handlebar but she said she did not want to know about cycling with it on.

Our Bob arrived and Bernie is training to take the extra weight as he will be taking all my panniers as well as his own for a couple of weeks.  Total weight including the bike of 70 kgs.  What a star!

We have both been getting quite unfit during the last couple of weeks, so it is going to be hard starting again. It is also going to be hard going back to camping as the weather in Fernie is very unseasonable and it snowed last night (late August) and has been quite cold during the mornings.

The other problem is that the smoke from all the forest fires is getting much worse. Our first 3 days in Montana you would not know you were in a mountainous country and it was difficult to breath. At the end of the day we felt like we had a 60 a day habit.

We had decided that we would start on roads initially as going off road was quite painful with all the bumps jarring straight up the splint, but we would follow the Great Divide route as close as we could and hope to get back on it again by the time we get to Yellowstone.

It was great to finally cross the border into the US.  We had been so close five weeks ago when I had the accident.

Camping turned out to be no problem as the weather warmed up again and we found some lovely lakes to camp by. 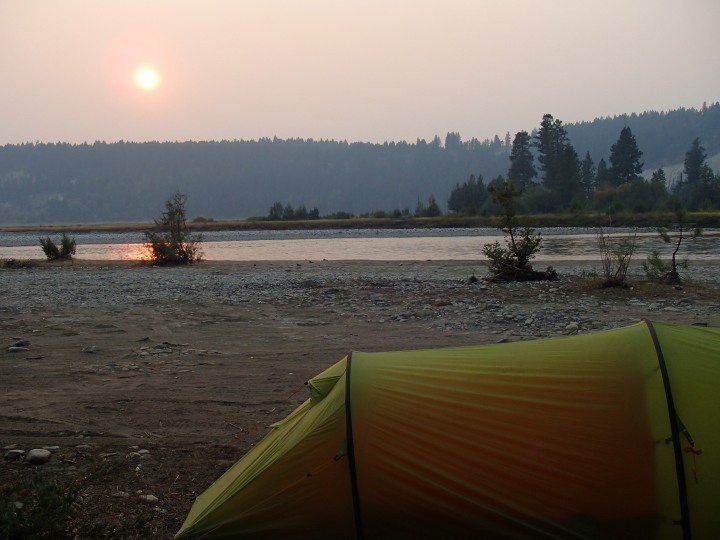 and spent a pleasant evening watching this bald eagle fishing.

We were lucky that the following day we visited the park rangers office to view the latest fire map.  He told us of a storm that was due to arrive in this area at 4 p.m. We quickly found a site, well raised above the lake to camp, and sure enough at 4 p.m. exactly heavy rain and strong winds arrived. 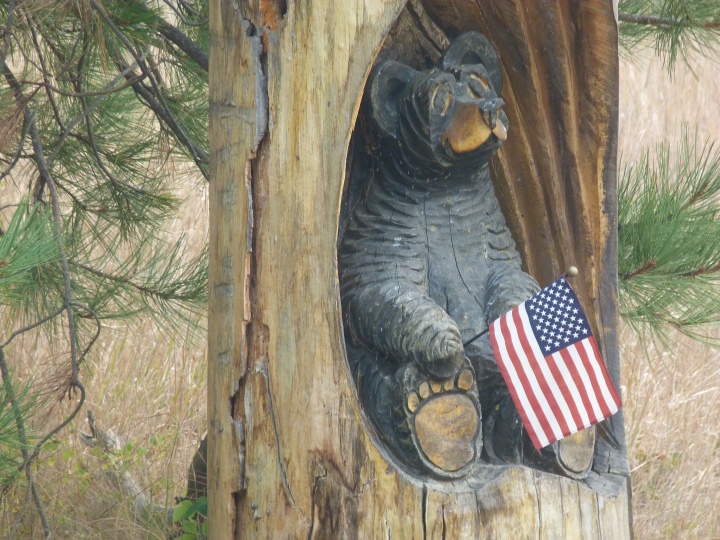 Although this is the only bear we have seen! At least he is patriotic.

We had originally hoped to meet with the Rotary Club in Helena as part of our fund raising efforts for the humanitarian charity ShelterBox. Unfortunately due to everything that has happened we were not passing through on a club meet day. Ellen kindly took us out to lunch and gave us a tour of the town, showing the typical Montana hospitality we have got used to here.

If anyone reading this would like to donate to ShelterBox either click on the donate button on the right of the blog or go to the ShelterBox tab on the top bar. Both will take you to the Just Giving page.